The foundations for profitable production are laid in rip optimizing. Scanner technology is increasingly establishing itself in this area. Sensor and camera-based systems allow you to make the most out of wood. In the Luxscan Line, Weinig has a wide range of scanners in its portfolio, which can be integrated seamlessly into the cutting lines of the complete provider. Now, an even higher performing generation comes to the market to coincide with LIGNA 2015. 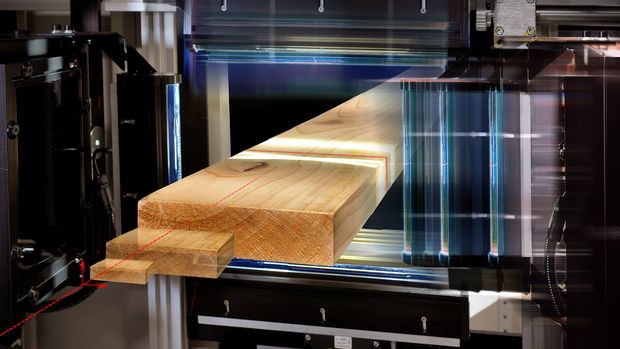 The compact EasyScan for smaller operations has reached the next stage in its evolution. The EasyScan+ was developed in line with the objective "Better performance – at less cost". An essential feature of the new development is the further increase in price-performance ratio compared with the previous model. EasyScan+ allows even smaller operations to benefit from high detection performance and, thus, a high timber yield. With an optimized visual concept, the new EasyScan+ has now almost reached the standard of Weinig's high-end scanners. The EasyScan+ is now also equipped with new cameras, which enable improved knot and crack detection and significantly increase timber yield. The revised user interface has more setting options allowing products to be defined even more precisely. Thanks to the innovative design, it is also possible to create and process orders more quickly. Furthermore, the simplified operation considerably reduces the risk of errors. An additional advantage of the EasyScan+ is the increased range of applications. The new version of the scanner is suitable for both softwood and hardwood. However, the main benefit of the compact machine remains intact - the low space requirement. This enables easy retrofitting of the scanner even in cramped conditions and enables optimal accessibility for maintenance. The new EasyScan+ can be integrated into cutting lines with one or two saws.

New generation of the CombiScan+

The second generation of the CombiScan+, Weinig's top scanner model, also celebrates its premiere in this LIGNA year. The new model is most notable for its optimized detection performance. This is primarily attributable to new, high-performance cameras, which use higher resolutions to detect small wood defects even at high throughput speeds. As a result, pin knots and other small defects can be detected with ease. Remaining consistently faithful to the principle that the more information, the better the scanning results and the higher the timber yield, the CombiScan+ Evo now uses up to 3 cameras per side. For defects in the interior of the wood, the CombiScan+ Evo can also be equipped high-performance X-ray sensors. In addition, the new generation of the scanner has refined setting options and simplified operation. Products can be defined more precisely and orders processed more efficiently. The risk of operator error is significantly lower thanks to the modified user interface. The new CombiScan+ Evo can be integrated into cutting lines with up to 4 saws.

The WEINIG innovation scans the front side of the board after cutting at the saw. This allows internal pith and other defects to be detected and removed. In planed timber in particular, this makes it possible to differentiate individual qualities according to internal pith. Incorrectly cross-cut parts can also be detected and removed. This produces a reduced error rate in downstream processes, such as finger jointing or processing with double-end machines. The front-end scanner can be retrofitted to the saws at any time. The scanner is available in versions for one-sided and two-sided scanning. Thanks to its variable design, additional areas of application, such as rotary orientation before planers, etc. are also possible. An upgraded version with color cameras is also in planning.